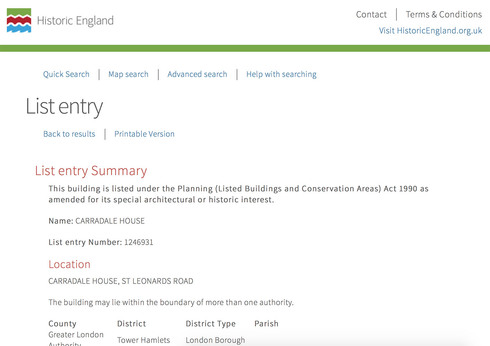 Block of 88 flats. 1967-8 by Erno Goldfinger for the Greater London Council. In-situ reinforced concrete, cross-wall construction with some pre-cast panels. Flat concrete roof. Eleven stories. A dynamic plan in which the flats are placed in two groups, of respectively six and two units per floor, west and east of a central lobby housing lift shafts, stairs and refuse shutes, to which it is connected only at ground, third, sixth and ninth floors. A mix of one- and two-bedroomed flats, denoted externally by the different size of balcony on the south-facing elevations. Timber windows on north and west elevations, part double-glazed; those to south and east renewed in similar style but uPVC in 1999 because of traffic noise. Slit windows in stepped pattern to staircase tower. Because Carradale House shared Balfron Tower's boiler, the top of this tower does not project but has gargoyles resembling those used by Le Corbusier in his later works. Projecting concrete canopy to (renewed) fire exit doors. Main entrance reached across bridge on north elevation, with original lettering to side. Interiors retain original tiling to common areas, while flats have Goldfinger's distinctive doorframes incorporating light switches.

Carradale House was designed as the second phase of the Brownfield or Rowlett Street Estate, as work on Balfron Tower was beginning in 1965-6. It was thus that the boiler house on the top of Balfron Tower was expanded and assumed its distinctive form, which was repeated for purely aesthetic reasons at Trellick Tower. Balfron Tower and Carradale House form a strong group, the relatively long and low form of the latter complementing the tall block of Balfron Tower. It is a distinctive, unique reworking of the ideas first embraced in Balfron Tower, taking the planning idea of a corridor only every third floor to increase speed of lift service, neighbourliness and internal space, but with a refinement of detail more characteristic of Trellick Tower, with which it is more comparable in date.