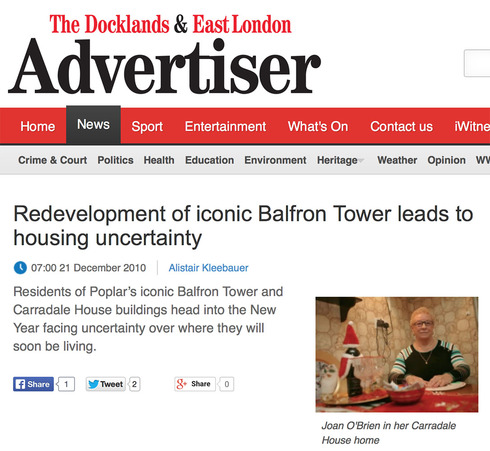 I have included excerpts below but encourage you to visit the websites to see the full articles, accompanying images and comments.

Poplar Housing and Regeneration Community Association (HARCA) needs to empty both of all residents, including their tenants as well as leaseholders, to bring the structures up to modern design and health and safety standards.

So its occupants must find a temporary home for the duration of the works.

Joan O’Brien, 78, has lived in Carradale House for 43 years but needs to leave her home by July 31 next year and has been unable to find new accommodation so far.

She said: “HARCA have been helpful, but it’s very disruptive for people. It feels like we’re being turfed out and we’ve got nowhere to go, so it is upsetting.

“I know some people in their 80s who’ve said I want to die because I can’t stand the upheaval. It feels like there’s no room at the inn.”

The imposing Brutalist-style 1960s architecture hides a number of problems for residents, such as flooded walkways, unreliable lifts and frequent heating and electricity shutdowns.

As a result, consultant architects PRP propose new lifts, windows, gas-fired boilers instead of oil and upgrades to HARCA tenant homes and some leaseholder flats, including new kitchens and bathrooms.

Work on the 11-storey Carradale will start next summer and last 18 months while the 27-storey Balfron redevelopment should start in 2012, dependent on planning permission, and could last two years.

Andrea Baker, HARCA’s housing director, explains: “Both blocks are at the end of their lives.

“The works are part of a promise we made to residents under the Decent Homes initiative.”

Discussions with PRP led HARCA to decide that residents couldn’t stay during the redevelopment.

Ms Baker said: “The whole area will be a building site.

“PRP spoke to fire safety experts and told us there is no way you can mitigate the risks.”

At the same time, the housing association says it must sell 130 homes, the majority of which will be in the more lucrative Balfron, to pay for the works, so HARCA tenants are unlikely to be able to return there.

The housing association is committed to moving them into Carradale when the work is done, with the same rent charges.

Ms O’Brien was also told, on December 17, that she will be able to return to her home and a similar promise has been made to all Carradale residents.

But the anxiety over finding a temporary home remains.

Ms O’Brien said: “I want to live in the Poplar area but there are no one-bedroom flats available.”

Some have already chosen not to return though.

Shalina Begum, who shares a one-bedroom flat with her husband and two children in Balfron, prefers to take a home-loss payment of £4700 and find a new permanent home.

She said: “Most people want to move, but some have been here for 20 or 30 years so it is harder for them. But I’ve already been on the housing register for two years.”

Open House Factsheet
The namesake of Ian Fleming's James Bond villain, Erno Goldfinger was one of several prestigious architects to be involved in the post-war rebuild of the badly bombed East End of London. Nearby Chrisp Street Market (designed by Frederick Gibberd as part of the Festival of Britain in 1951) and Robin Hood Gardens (designed by Alison and Peter Smithson in 1960 and completed in 1972) are other examples of purposeful housing planning in the local Poplar area. 40-50 years later, it still divides opinion whether this type of housing, “streets in the sky” and bleakly functional exteriors, is the solution to overcrowding in London.

Grade II listed since 1996, Balfron Tower (designed in 1963 and completed in 1967) is part of the Brownfield Estate also containing Carradale House (built at the same time as Balfron) and Glenkerry House (which was commissioned later). Responsibility for Balfron Tower and Carradale House was recently taken over by Social Housing landlord Poplar HARCA from London Borough of Tower Hamlets in December 2007.

Balfron Tower is arguably the most imposing building of the trio: at 276ft (84m) high it is the tallest building in the area, upstaged only by Canary Wharf's One Canada Square (built 1991) and the neighbouring office towers on the Isle of Dogs. The service tower for Balfron contains lifts from lower ground up to the 24th floor, as well as several drying rooms, now lying empty, made defunct by the fact most people now have a home washing machine, plus the boiler room at the top, providing communal central heating for the whole building. The distinctive exterior design of all three buildings
features lift towers connected to the main blocks by several walkways, which connect the residential part of the building to the lift tower at three-floor intervals. This means that in each corridor flats alternate between being up-a-level, down-a-level or same floor, all entering from a single corridor.

The view from the top spans most of London's skyline including well known London icons such as Tower Bridge, the “Gherkin”, the BT Tower, and even Wembley Stadium on a clear day, as well as out to City Airport, Harolds Hill in Essex and the Thames Estuary to the east. The expansion of the A12 Blackwall Tunnel Northern Approach alongside Balfron Tower's eastern aspect adds drama to the building's imposing structure, and was the reason for adding double glazing to all the windows on that side.

The “city” side of Balfron Tower remains largely original, featuring floor to ceiling windows and generous balconies with in-built troughs where many families have home “gardens”. Other original interior features include functionally designed metal light switches, metal door frames and door-locks, as well as mysterious doorways into voids running between the flats (which were designed as fire escape routes and also contain through-flow vents for high winds).

Flat 139 is opened to the public by one of about 20 Bow Arts Trust artists who have made habitable and now quietly occupy flats that would otherwise have been at risk of lying empty during the building's refurbishment. The aim of putting artists into Balfron Tower, as well as Carradale House and other buildings in the local area, was a social enterprise to provide an affordable housing solution to artists who would otherwise have to rent a studio as well as living accommodation, in the form of “live-work” flats, i.e. combining the two functions into one space.

In addition there have been a series of residencies and exhibitions in Flat 123, the “Heritage Flat” (on the 21st floor). Over the period this scheme has been running there have also been several local events and ongoing education projects initiated and supported by the Bow Arts Trust live-work artists. Within Flat 139 several artists' works will be displayed, made in response to the local architectural environment: including paintings, drawings and the “Balfron Project”, which aims to capture the tower and its residents in a giant group photographic portrait event later in 2010.