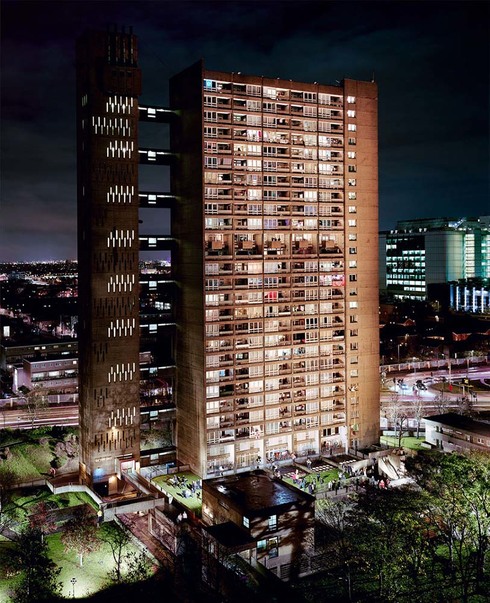 I have included excerpts below but encourage you to visit the website to see the full article, accompanying images and essays.

Ernö Goldfinger dreamt of a vertical future for London. His vision of a high-rise metropolis sought to free the ground from the viral spread of suburbia that he saw dominating the city in the 1960s. Over four decades have passed since Goldfinger’s aspiration to raise the streets into the sky was made concrete with the construction of Balfron Tower in 1967. Perched on the lip of the Blackwall Tunnel in Poplar, at 27 storeys the Brutalist monolith continues to dominate the surrounding skyline, a lasting monument to the ambition of an architect.

The Balfron Tower and its inhabitants are the protagonists of Simon Terrill’s Balfron Project, featuring the mural-sized photograph Balfron Tower. Captured on film with a large format camera during one evening in November 2010, current Balfron residents were invited to participate in the image by choosing how they wished to be represented within the final picture. The Tower was flooded with stage lighting and a specific sound cue was used to herald the next shot. Each exposure lasted for 10 seconds and so with the opening of the lens, a strange stillness came over the building as movement would result in blurred erasure and those present needed to be stationary in order remain visible. As a resident of the tower himself, Terrill’s vision for the Balfron Project was not to fictionalise nor expose the lives of those who call the tower home but rather, for the first time since the building’s inception, to generate an arena for reciprocal viewing. By offering the residents the opportunity to return the camera’s gaze in the manner of their choosing, it became the role of the characters to compose the subject.