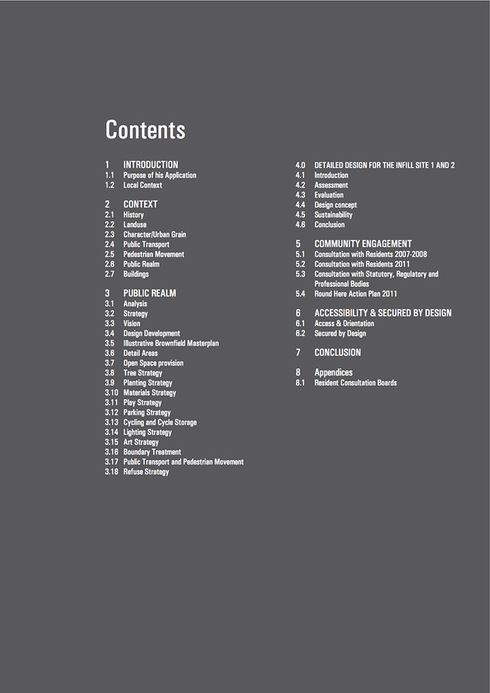 Statement 1 p.3
Tower Hamlets is in a central location relative to various major regeneration projects that are planned across the city, including Stratford City and the 2012 Olympic Site. These major regeneration initiatives are having a ripple effect and are transforming East London from the Lower Lea Valley, and extending southeast to Bow Creek, Poplar Riverside, and into the London Borough of Newham.

Statement 4 p.1
3.15 Art Strategy
Art is important within city and residential spaces. Public art can be described as any work of visual art, craft or design produced by an artist, designer or maker, which is sited in a location that is freely accessible to the public. All public art works in Brownfield Estate will be specific for site and local residents. Public art should be an integral part of the design and incoporated into the design strategy for the wider public realm to enhace the quality of space.

Statement 7 p.2
Community Engagement
As part of the stock transfer and regeneration of Brownfield Estate, extensive consultation has taken place with both the residents of the Estate and a considerable body of statutory, regulatory and professional organizations.
A brief summary of pre-planning consultations relating specifically to the development of detailed proposals for Brownfield Estate is given below.

5.1 Consultation with Residents 2007-2008
Consultation with the residents of Brownfield Estate has progressed through two principal mechanisms in respect of design development and programme for implementation:

In the early stages the East India Steering Group comprising residents of Brownfield, Teviot and Abberfeldy Estates was closely consulted throughout 2007 and 2008 on the proposals for the regeneration leading up to and following the ballot and ahead of transfer and planning submission.
Specifically on Brownfield, resident drop-in sessions provided a crystallization of the pre-transfer and pre-planning consultation ideas with both the Steering Group and the statutory and professional bodies. Three sessions (each over both an afternoon and evening) were held over a two week period in February 2008 and were staffed by representatives of PRP’s design team and Poplar HARCA’s Technical and Resident Empowerment teams to ensure that any questions relating to both the design proposals and their implementation could be addressed.

5.2 Consultation with Residents 2011
Community consultation for the Langdon House Public Realm proposals has sat within the ‘Round Here Consultation & Engagement Programme’ for the Brownfield Estate area regeneration, launched in March 2011. The programme covers a range of projects, including new homes and services, plus improvements to existing homes and public realm. It also contains community cohesion initiatives aimed at supporting the local community through the period of the regeneration and after.

Regular newsletters have been issued to all local homes and weekly open drop-in sessions have been run since April 2011. These will continue throughout the lifetime of the area regeneration.
With specific regard to Langdon House Public Realm and the current set of proposals for improvements in Brownfield, the following initiatives are running throughout July / August 2011: