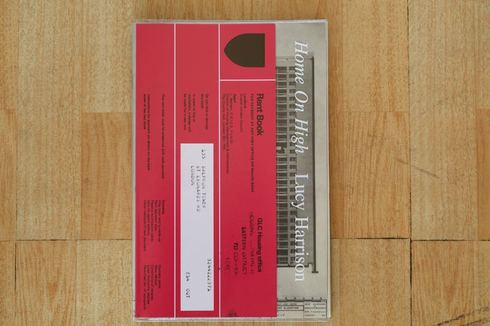 I have included information below but encourage you to visit the website to see accompanying images of the film, book and exhibition.

Home on High involved several months working on the Brownfield Estate in Poplar, and explored some of the different ways that local people relate to the place, its past, present and future. Lucy developed a body of work through a series of meetings, conversations and workshops with local groups and individuals. The resulting work was shown in a flat on the 24th floor of Balfron Tower in September 2014, and a series of food events were run in collaboration with artist Michael Needham and members of local groups the Men’s Cabin and Greening Brownfield.

As part of the project Lucy made a new film with two local residents who were among the first to live in Balfron Tower, a father and son who arrived in 1968 when the son was only eight days old and who have lived in the neighbouring block to the tower since moving home in the late 1970s. As well as exploring their memories and feelings about their time in Balfron, the film explores the father’s own creative endeavours which have transformed the interior of their current flat through a collection of collages and sculptural assemblages which have never before been viewed in public.

A new publication designed by Modern Activity was launched, including writing by local residents produced in a series of workshops led by Lucy Harrison and artist Rehana Zaman, as well as anonymous contributions placed in a post box in the local community centre during the course of the project.