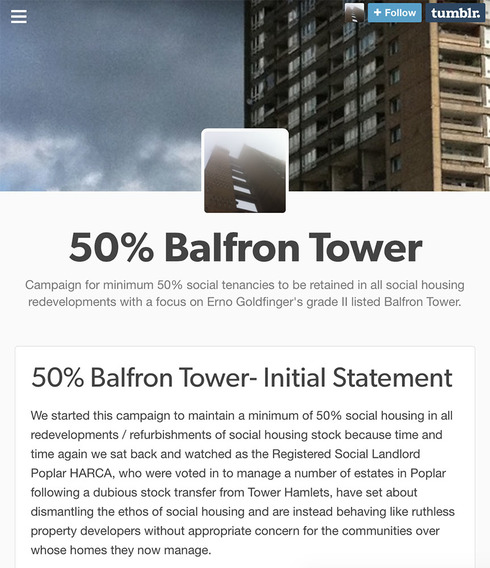 I have included the initial statement below but encourage you to visit the website and Twitter page to see more statements and messages.

50% Balfron Tower- Initial Statement
We started this campaign to maintain a minimum of 50% social housing in all redevelopments / refurbishments of social housing stock because time and time again we sat back and watched as the Registered Social Landlord Poplar HARCA, who were voted in to manage a number of estates in Poplar following a dubious stock transfer from Tower Hamlets, have set about dismantling the ethos of social housing and are instead behaving like ruthless property developers without appropriate concern for the communities over whose homes they now manage.

We believe that the mission to create social housing was not to make people purposely feel insecure in their homes, but to provide housing in which the ruthless pursuit of money could be left to those that wished to pursue it, and that working class people could find a place to call home, become members of a community and raise their families without fear of eviction as these ruthless developers go about carving up all that is good in society in the name of greed.

Poplar HARCA are attempting to undertake the gentrification of Poplar, one of the few remaining areas within inner London that remains relatively untouched by private property development, and an area that has been historically neglected. Poplar HARCA’s director Steve Stride is on record as saying that he intends to turn Poplar into ‘the new Shoreditch’, and has set about trying to achieve this using dubious techniques such as ‘artwashing’, a process poorly carried out with all the finesse of a wrecking ball. Now that the property bubble has savagely priced Londoners out of the housing market, both in terms of buying property and now even renting somewhere to live, property developers have turned their attention to those that they seem to see as undeserving of this old fashioned notion of social housing, to remove them and relocate them, dispersing communities throughout London and further afield, all with their beady eyes upon carving up the remains of social housing amongst themselves, at the expense of our communities and families.

We do not believe that Poplar HARCA are being honest and true to those that voted for them to manage the estates formerly managed by the London Borough of Tower Hamlets. We have poured through the paperwork relating to the stock transfer and their unrealised promises of new kitchens and bathrooms have become a dystopian vision in which new property doesn’t even reach the market for local people, instead being sold off-plan in Asian markets to cash buyers, many of whom don’t even plan to let the property to tenants and are content to live off the asset appreciation that spiralling house prices are achieving, whilst leaving communities in desperate need of homes to live in, to be near their support networks and to raise families without fear that property developers will soon be coming for their homes as planned social cleansing forces people out of London leaving in its wake a sanitised ghetto for wealthy property investors.

In numerous instances we have watched as Poplar HARCA dismantles communities from their estates, for example, Leopold Estate in Bow. Existing social housing is demolished, and subsequently rebuilt as homogenous entities, devoid of any architectural merit or character but offering a greater number of units into the same amount of space, and reducing the number of social housing units dramatically instead replacing them with token ‘affordable’ housing, priced at 80% of market rates and without the security of a long term social housing tenancy. The majority of the new units are then sold to private property investors, invariably based overseas, and who have no intention of either creating community or contributing towards it. The cost of renting a one bedroom flat in the Bow / Poplar area is currently about £350 per week, so an ‘affordable’ rent of 80% of this is still way out of the reach of the majority of working Londoners thus forcing working people to rely on housing benefits to subsidise their existence, and to subsidise property investors who get their loans paid off using tax payers money. We don’t believe that this is in the interest of our communities, leaving them feeling more isolated, more insecure and more exposed to the impact of the property bubble busting, when (and of course, if) this happens.

The case of Balfron Tower is somewhat unique. This long neglected building has benefited from a recent interest in its brutalist style of architecture, and has been popularised by its star architect’s notorious reputation, not to mention the spacious and well-designed apartments which offer superb views across London. Commissioned by the LCC’s architects department in the 1960’s, Balfron Tower subsequently suffered criminal neglect by the local authority and was subsequently transferred to Poplar HARCA, reportedly for the sum of £1. After years of lying to the local community as to their intentions for Balfron Tower, Poplar HARCA recently announced a joint venture with luxury property developers LondonNewcastle to redevelop this grade II listed concrete block. Their intention is to sell all 146 flats on the private market, presumably following the pattern established by the demolition of the neighbouring Aberfeldy estate and its subsequent rebranding for the Chinese investment market as Aberfeldy Village. The plans are to retain no social housing whatsoever within this purpose built social housing tower block. We feel that the architect Erno Goldfinger would be turning in his grave over these plans to cannibalise one of his greatest achievements.

We think that the time has come to stand up, be counted and to object to the plans of the property developers ripping our communities apart. We think that the time has come to stop their ruthless empire building in its tracks and to say NO! We have recently seen what collective action can accomplish in the form of the superb actions by the New Era 4 All campaign, and we believe that the time has come to fight for our communities against this greed and corruption. None of this redevelopment is being done for us, these developers don’t have our interests in mind and have clearly shown how much contempt they have for us by not even including any social housing whatsoever in the Balfron Tower redevelopment.

We understand that the infrastructure of social housing is now ageing, and that following years of managed decline and lack of investment that many properties are now at the end of their life. Action must be taken to address this and the current political climate considers private investment in public assets to be a desirable thing (contrary to the mounting evidence that it is not). We accept that in order for social tenancies to be maintained money has to come from somewhere in order to refurbish and rebuild our estates. However, we do not accept a wholesales transfer of 100% of social housing into private ownership under any circumstances. We believe that this is tantamount to a neoliberal asset stripping by the establishment intended to create further impoverishment of the working classes.

Our demands are simple, any redevelopment of social housing, whether in the hands of local authorities or Registered Social Landlords must contain a minimum of 50% of the redeveloped units available as social housing (social housing, not affordable housing) to be let to the local community. These units should be offered with secure tenancies and at rents that are affordable to the average working person, not that of your average property developer. These new social housing units should not have their own separate entrances, nor be of inferior quality to the private units and they should be evenly distributed throughout buildings and that Right to Buy should not available on these properties. We believe that the 50% figure will allow the promotion of mixed communities, that they not unreasonably claim to desire, and will allow investment into our neighbourhoods but will not allow ruthless property developers to walk all over us greedily carving up our homes for private gain.

We have chosen to target Balfron Tower for a number of reasons, mainly because it is in our neighbourhood. The people that were decanted from Balfron Tower were our neighbours, our community, and we don’t want their homes to be ‘occupied’ by absentee investor landlords or bankers from nearby Canary Wharf. We also think that the unashamed greed to claim 100% of the homes within Balfron Tower is totally unacceptable and highlights the ruthless greed of Steve Stride and Poplar HARCA and their approach to the community they were elected to serve.

It is time for the moral majority to stand up and fight to retain what is ours. Politicians have abandoned us to greed, too scared to speak up in favour of their voters instead fearing the wrath of those who hold the real power in society. If we don’t do something about it, it won’t be long before we have nothing left worth fighting for.