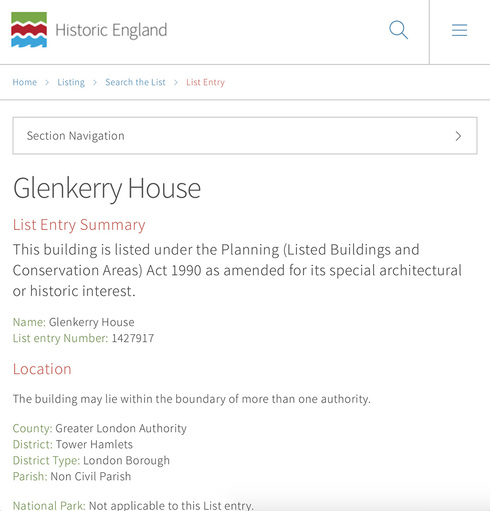 Block of flats. 1972-5 by Ernö Goldfinger for the LCC (later GLC) Brownfield Estate

STRUCTURE AND MATERIALS: in-situ reinforced concrete, cross-wall construction with pre-cast panels and some timber cladding; a flat concrete roof, in a similar but pared down form and aesthetic to the earlier phases.

PLAN: a fourteen storey block, comprising 75 flats and four maisonettes, laid out on the same principal as Balfron Tower, of an enclosed corridor serving three floors of flats - a west-facing one-bedroom flat overlooking the corridor and dual aspect two-bedroom flats above and below, each with an internal stair. The main service tower is joined at a right angle to the northern end of the slab and a secondary stair tower projects at the southern end. EXTERIOR: on the eastern elevation enclosed access galleries are expressed as continuous concrete balconies supported on concrete brackets, similar to Balfron Tower. The ground and first floor are supported on cylindrical piers. In front of entrances to the flats, the balconies are dropped to accommodate a window. Windows are arranged in pairs of pivot-hung lights, two per unit. On the western elevation, flats are in two bays, one set back behind a shallow balcony, creating a rhythm across the facade. Windows are arranged in groups of two or three, in units between channelled, round-edged concrete fascias. The main entrance, in the northern tower, has a glazed door unit (renewed) and above it the name Glenkerry House in the original lettering. The stair and lift lobbies are lit by slit windows arranged in groups of five with the glazed boiler house projecting at the top of the tower. The southern stair tower is lit by tiers of slit windows, three per floor. Unlike the earlier blocks, windows have not in general been replaced.

INTERIOR: flats are similarly planned to the earlier phases, accessed from an internal gallery and have flush panelled doors in slender architraves. Common stairs and lift lobbies are well-lit by the tiers of slit windows, are relatively spacious and have steel balustrades as elsewhere on the estate, allowing sight up and down.