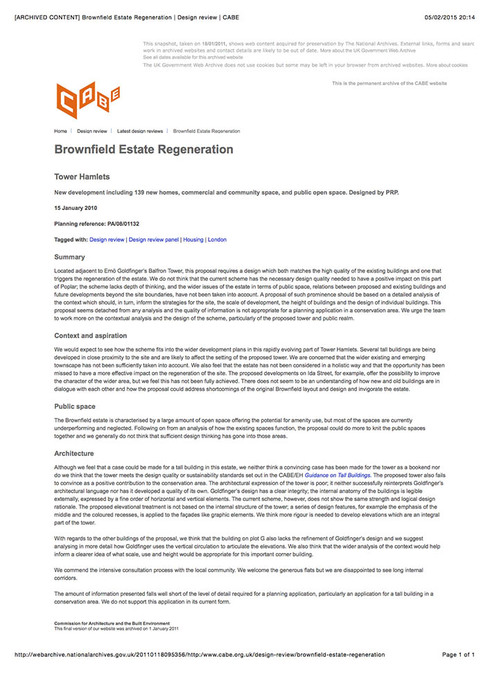 Commission for Architecture and the Built Environment, 2010

p.1 Summary
Located adjacent to Ernö Goldfinger’s Balfron Tower, this proposal requires a design which both matches the high quality of the existing buildings and one that triggers the regeneration of the estate. We do not think that the current scheme has the necessary design quality needed to have a positive impact on this part of Poplar; the scheme lacks depth of thinking, and the wider issues of the estate in terms of public space, relations between proposed and existing buildings and future developments beyond the site boundaries, have not been taken into account. A proposal of such prominence should be based on a detailed analysis of the context which should, in turn, inform the strategies for the site, the scale of development, the height of buildings and the design of individual buildings. This proposal seems detached from any analysis and the quality of information is not appropriate for a planning application in a conservation area. We urge the team to work more on the contextual analysis and the design of the scheme, particularly of the proposed tower and public realm.

Context and aspiration
We would expect to see how the scheme fits into the wider development plans in this rapidly evolving part of Tower Hamlets. Several tall buildings are being developed in close proximity to the site and are likely to affect the setting of the proposed tower. We are concerned that the wider existing and emerging townscape has not been sufficiently taken into account. We also feel that the estate has not been considered in a holistic way and that the opportunity has been missed to have a more effective impact on the regeneration of the site. The proposed developments on Ida Street, for example, offer the possibility to improve the character of the wider area, but we feel this has not been fully achieved. There does not seem to be an understanding of how new and old buildings are in dialogue with each other and how the proposal could address shortcomings of the original Brownfield layout and design and invigorate the estate.

Public space
The Brownfield estate is characterised by a large amount of open space offering the potential for amenity use, but most of the spaces are currently underperforming and neglected. Following on from an analysis of how the existing spaces function, the proposal could do more to knit the public spaces together and we generally do not think that sufficient design thinking has gone into those areas.

Architecture
Although we feel that a case could be made for a tall building in this estate, we neither think a convincing case has been made for the tower as a bookend nor do we think that the tower meets the design quality or sustainability standards set out in the CABE/EH Guidance on Tall Buildings. The proposed tower also fails to convince as a positive contribution to the conservation area. The architectural expression of the tower is poor; it neither successfully reinterprets Goldfinger’s architectural language nor has it developed a quality of its own. Goldfinger’s design has a clear integrity; the internal anatomy of the buildings is legible externally, expressed by a fine order of horizontal and vertical elements. The current scheme, however, does not show the same strength and logical design rationale. The proposed elevational treatment is not based on the internal structure of the tower; a series of design features, for example the emphasis of the middle and the coloured recesses, is applied to the façades like graphic elements. We think more rigour is needed to develop elevations which are an integral part of the tower.

With regards to the other buildings of the proposal, we think that the building on plot G also lacks the refinement of Goldfinger’s design and we suggest analysing in more detail how Goldfinger uses the vertical circulation to articulate the elevations. We also think that the wider analysis of the context would help inform a clearer idea of what scale, use and height would be appropriate for this important corner building.

We commend the intensive consultation process with the local community. We welcome the generous flats but we are disappointed to see long internal corridors.

The amount of information presented falls well short of the level of detail required for a planning application, particularly an application for a tall building in a conservation area. We do not support this application in its current form.